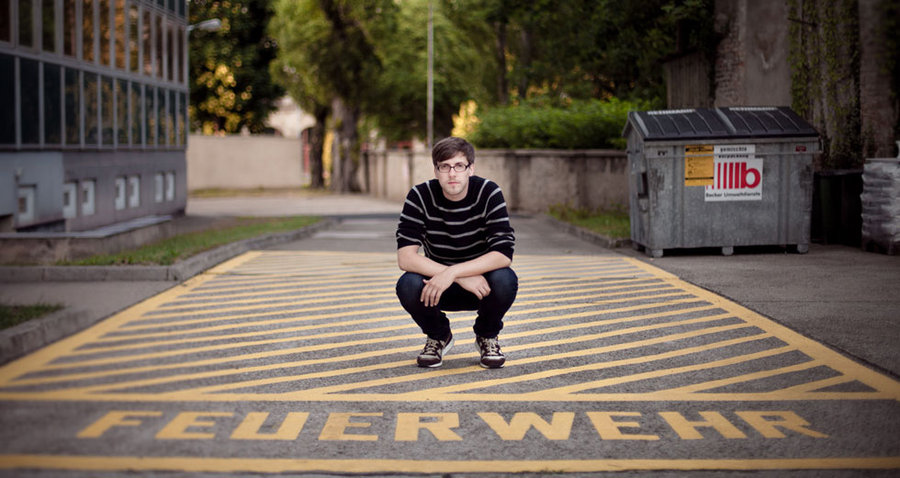 Jacob Korn has kept busy since his graduation from the 2007 Academy. After releasing singles with labels such as Running Back, Permanent Vacation and his own collaborative Uncanny Valley; winning Dresden’s Advancement Award Förderpreis; and operating kinetic technology workshops with children, today he releases his first album under his own name, titled You & Me. (You can stream the entire album viaResident Advisor.) Philip Sherburne gets the full story.

As electronic dance music has metastasised recently, particularly in the United States, many have noted the irony that there seems very little actual dancing happening at the stadium raves that have come to represent mainstream electronic music culture. Fist-pumping, head-banging, jumping in place, honest-to-goodness moshing – for a new generation of ravers, the trappings of rock ‘n’ roll seem to have replaced the body-conscious movements passed down from disco. But perhaps there’s hope. In workshops co-directed by the Dresden producer, DJ and multi-media artist Jacob Korn, an even younger generation is learning to bring together the worlds of music, visuals and motion.

In a weeklong course during their summer holidays, 15 school kids – “There are two sessions, so it’s a lot of names to learn,” Korn laughs – record voices and found sounds and learn basic audio and video editing, and the material is fed into an interactive system Korn developed as part of his thesis work. “It’s a motion tracking system, a quite basic one,” he explains. “We’ve got a lot of computers where they can work on their own. Later in the week they put it together; they have a dancer who is doing exercises with them, so they also develop choreography. After the sixth day, they have 10- to 20-minute performances all together, and they show their parents and friends. It’s really cool seeing their progress. Some really don’t have any knowledge of computers at all, and then in the end they are able to control basic, let’s say pitching – they record some sounds and they can pitch it with the activity of their body movement inside the virtual space.”

You can see the theory in practice in the video of a project called Harmony Universe, in which children stand in a circle of projected lights and control musical elements by jumping or waving their hands. “The most important thing is to get children out of their chairs, away from the computer,” Korn explains in the video. “Full-body movement combined with learning – that, for us, is the future.”

Korn’s own activities aren’t restricted to pedagogy and programming, however. This year, the city of Dresden awarded Korn its Advancement Award (Förderpreis), presented annually “for artistic achievements of outstanding importance.” And, far from the shores of the Elbe, Korn’s name is becoming known to growing legions of clubbers and house heads, from his productions on labels like Running Back, Permanent Vacation and, especially, Uncanny Valley, a Dresden-based collective in which he plays an active role.

Korn began releasing music under different aliases – Granufunk and, with Sebastian Gaiser, Sket – in 2003, but he jump-started his musical career, in 2007, as a participant in the Red Bull Music Academy. It was there in Toronto that he met Running Back’s Gerd Janson, who put out Korn’s first single under his own name, “I Like The Sun,” in 2009. But Korn’s experiments with computers go back to the late 1980s, when he first got his hands on a Commodore 64. “I started making music with a friend of mine around ‘95 or ‘96,” he recalls. “We got this little tracker program. We had no idea, no musical education, so we were just filling out tables with numbers, just fooling around. But then my interest just developed more. ‘How does it work? What’s this stuff?’ Then I studied media technology, which was also about a lot of audio stuff, video as well, but I was more into the audio part.” As a result, his CV is bulleted with points like “practical work on array technologies” and “programming a live interface for IOSONO wave field synthesis system.” But now, he says, “It’s kind of in between. I’m still kind of interested in technology but I think it’s just a tool now. The more you know, the more you want to forget about certain stuff you’ve learned. That’s kind of hard.”

He absorbed electronic music naturally, as if by osmosis. “Techno was always there,” he says. “There was this radio programme called Evosonic. It was very influential for us. That’s what I listened to all day. Then when we grew older, we also went to clubs, of course. Here in the Dresden area, it was very Detroit-inspired. The cool thing was that the parties in the late 90s were more diverse. They had a house floor, a techno floor, a chillout floor, maybe a drum and bass floor. You could always sneak around and have a listen to different stuff.” You can hear that influence on Korn’s own music, which varies widely in tempo and vibe. Classic, Midwestern-inspired house music serves as the foundation, but it may be reconfigured as slow-motion disco, breakbeat-driven soul or steely, synth-heavy techno.

“I’m still interested in technology but I think it’s just a tool now. The more you know, the more you want to forget about certain stuff you’ve learned. That’s kind of hard.”

Dresden’s club scene, however, gradually lost steam. “It changed,” says Korn. Larger venues, where DJs like Jeff Mills once packed in 800 or 1000 clubbers, switched to booking more “commercial” DJs; when the Uncanny Valley crew does parties today, they’re at tiny places like the Altes Wettbüro, a former betting parlor with room for “maybe 150 people.”

“It’s a really cosy, small scene here,” says Korn. “It used to be a very big scene, but I think all the heads, they grew older and have families now. I don’t know where they’ve all gone. Where did they go?” It was that question that led to the birth of Uncanny Valley, a label co-run by Conrad Kaden, Albrecht Wassersleben and Carl-Johannes Schulze (aka Carl Suspect), with input from Korn. The idea, he says, “was to bring together a lot of people from different camps. Credit 00 has a different sound than Cuthead, for instance. They were the heads of different crews that were rooted more in electro and hip hop. I think Conrad and me were trying to get different people to come to the same table together to talk to each other. The idea was in the air, somehow. It’s just that no one had thought of sitting down together and saying, you know, ‘Let’s do a label.’ ‘Yes, ok.’” He laughs.

In its “cosy, small” way, Uncanny Valley has changed the dynamic in Dresden, bringing together members of disparate camps and assembling an unusually diverse catalogue in the process, spanning retro electro, sample-heavy beatdown, and melody-soaked house anthems like Korn’s own “SHE”, a song that suggested him as Dresden’s answer to John Talabot. “We’ve had labels here which were focusing on harder techno, IDM, stuff like that,” says Korn. “But no one was really successful outside their niche. I think we were very lucky to like the same sound at the moment, which was house in the first place – that was the main influence of all of us, somehow – but also disco, techno of course, and electro and hip hop. It’s a lot of flavours, I think, which fit together somehow.”

The theme of interconnectedness that runs through all Korn’s activities deeply informs his new album, You & Me. True to its title, each track is the work of Korn and a collaborator – either a co-producer or a featured vocalist. In addition to Uncanny Valley peers like Cuthead and Break SL, the album also includes the contributions of Smallville’s Christopher Rau, Baobab Music’s Mr Raoul K, We Play House’s San Soda and the American singer Kid A, among others.

“Everyone was asking, ‘When is the album coming?’” recalls Korn of the album’s genesis. “My last album was 2005, with a different alias, and I thought, OK, let’s collect some stuff which I really like. And I found out that all the tracks I put on my list in iTunes had at least one collaborator. And I thought, OK, I have maybe five or six tracks which have a lot of features, so let’s ask other friends if they want to join in. I didn’t really think a lot of it being a ‘featuring’ album, but I think in the end it was the most natural way to approach this.”

While Korn’s hallmarks are audible on every track – lovingly distorted drum machines, hypnotic chords, graceful leads, judicious vocal samples – the set varies widely, from the 60s soul influence upon “Makin’ Love” to the tougher techno undertone of “I Need You” and “Do Your Thing”; three of the album’s tracks dip below the 100-BPM mark, fusing hip hop and disco. That kind of range was a natural product of the way the album came together, Korn says.

“The Christopher Rau thing we recorded at his home studio in Hamburg when I played there. This is different, you know, to go somewhere and be part of the process. You don’t have the gear they are using, besides Ableton Live, so you do this here and there, but mostly it’s the other guy turning the wheels. With Raoul K, it was different, because he was visiting Dresden, so he was the same in my studio, basically.” But personality also played a big role.

“Raoul has a very strong – I wouldn’t say ego – but he’s got different ideas sometimes,” says Korn. “Christopher was just like, ‘Yeah, do whatever you want, I’ll just send you the tracks and you can finish it.’ Then I thought, OK, let’s ask Christopher for some vocals, because I didn’t really feel it was finished. So, it turns out to have another collaborator The Drifter on the track. And the song with Kid A was completely done over MySpace, back in 2007. I was exporting all the tracks some days ago, and I found the tracks that she sent me. It was just MP3, the worst quality – she didn’t even have a microphone. She just used a laptop microphone. But I really love the track. It needed to be on the album, somehow. The whole process –it just came together, don’t ask me how.”

At the moment, Korn has turned his attention to a far more solitary project: Mastering a second-hand Elektor Formant modular synthesizer that he recently purchased, originally built in the early 80s according to specifications published in a DIY electronics magazine. When I ask how he likes it, he pauses for several long seconds. “It’s… different,” he laughs. “It has so many possibilities, but you should not be just tweaking the sound – it should still be music.” Still, he says approvingly, “I kind of like it. It stands there, it blinks. It looks cool, and it feels good.” Surely, given Korn’s background in music and movement, it won’t just remain standing there, blinking, for long.